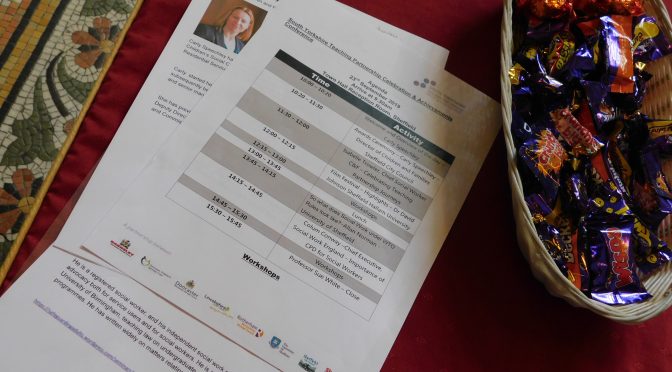 The closing comments were made by Chris Erskine lead professional and PSW for adult care, reflecting on the highlights of the day.

The 2019 Joint Professional Judgement Conference for Adult and Children’s Services was highly successful and received a positive response overall. 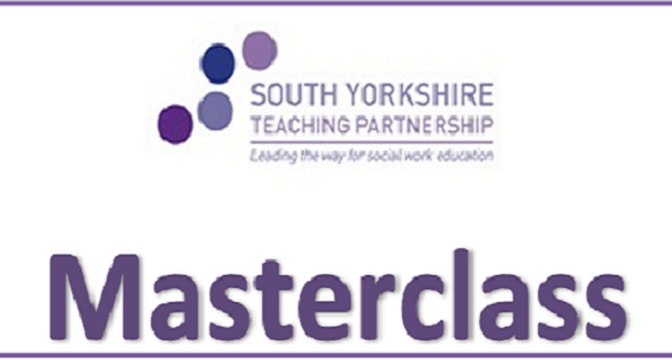 This one day workshop is aimed at staff working in the adult social care sector. It is designed to raise awareness about the legal context of adult social care and to assist staff to identify their role within it. The workshop will cover:

Please note this is only open to local authorities who are within the  South Yorkshire Teaching Partnership.

We need your name,  team and local authority and your business unit code.  Your place will only be confirmed once we have these details.

If you book a place and do not attend then you will still be charged.

Closing date for booking a place is 30th September 2019.

Rachel McManus, Lecturer, Sheffield Hallam University will be delivering this session.  We are running this again due to previous high demand.   There are 50 places available and there is a small charge of £50 per place.

Please note this is only open to local authorities who are within the  South Yorkshire Teaching Partnership.

We need your name,  team and local authority and your business unit code.  Your place will only be confirmed once we have these details.

If you book a place and do not attend then you will still be charged.

Closing date for booking a place is 30th September 2019.

Interface was commissioned in September 2018 to conduct an evaluation of the South Yorkshire Social Work Teaching Partnership.

The evaluation activities took place between October 2018 and February 2019. Interface would like to thank all the stakeholders involved in the evaluation for their time and insight, on which this evaluation is largely based.

Interface has since been chosen to provide an evaluation for the DfE on the Social Work Teaching Partnership (SWTP) programme across England.

Please download a copy of the report SYTP Evaluation Report 2019

Risk assessment and risk management have long been a major concern for social care services when working with members of the public. In supporting and working with adults there are several challenges in terms of understanding legal and ethical tensions, and in developing the skills for recognising and responding. This one day programme will explore some of these challenges and build knowledge and skills for practice. It will be relevant for people whose roles bring them into contact with adults where there are potential issues of risk, vulnerability and safeguarding.

This event is facilitated by Louise Whitehead from Sheffield Hallam University. Her background is in adult social work and adult safeguarding. She is currently completing a Ph.D. exploring the role of co-production in combating social isolation and loneliness in later life. Her research interests also include adult safeguarding and she has recently been part of the Sheffield Hallam University research team which has explored the implementation of Making Safeguarding Personal. She has worked in lecturing and as a professional trainer too.

This masterclass has been commissioned especially for social care staff across South Yorkshire Teaching Partnership.  There is a small charge of £50 per person to cover the cost of the masterclass and therefore we regret that there will be no refunds should you fail to attend or cancel.  We will ask you to provide us with your business cost centre code prior to confirmation of booking.

How do I book?

Email:    SYTP-CPDModules&Masterclasses@sheffield.gov.uk by the 28th June 2019

There are 30 places available on a first come, first served basis.

The brochure for the next academic year’s CPD modules is now available only for the local authorities within the partnership.

The brochure will be sent to managers within the partnership to inform their team and identify workers who would like to take a module. Every worker and their manager will need to sign a learning contract which highlights the commitment expected in terms of time and completion.

Modules for both children and adult social workers and practitioners will be available.

There is a registration process that all workers need to adher to.

On February 22nd over 100 people came together to attend this unique event, which was held at the Dorothy Flemming Lecture Theater, Sheffield Hallam University.

The event was opened by Sarah Blackmore, of Social Work England and compared by Alison Haywood, Service User Lead for Sheffield University.

14 films from across the partnership from both childrens’ and adult service users.

A Sheffield Foster Carer reflects on the Film Festival…

I had the pleasure of being invited to a film festival held in Sheffield at the Dorothy Fleming Lecture Theatre, kindly made available by Sheffield Hallam University. I had no idea what films were to be shown, I was only aware that the films were the brain child’s of “experts by experience” i.e. local and regional service users and carers. There were 14 short films in total ranging from just a few minutes to around 15 minutes.

As a foster carer I was particularly looking forward to the films presented by children and young people. I really wasn’t disappointed. Four films from Sheffield Young Carers really brought home to me how wonderful these kids really are. There are children as young as 5 (yes 5!) who are carrying out caring roles in their family life. These kids and young people are also going to school/college and have little or no “normal life” experiences that many of our kids have. They are real heroes.

There was a great film from the Rotherham Children’s Service which highlighted the importance of personal possessions that kids coming into care bring with them. They are important reminders of where they come from, family memories and who they are. How poignant were the messages from this film.

A film from Lincolnshire Children’s Services depicted a single mom with 4 children, one of whom had autism. The mom had in the past suffered from a small stroke and had struggled to cope with looking after her family.  Up stepped the kids who made lots of personal sacrifices to care for each other, cleaning, cooking, looking after the child with autism and still maintaining their education. They were all clearly under pressure and stressed but they so cared for their mom and each other. Wonderful bunch.

Sheffield Children in Care Council’s film “Messages for Social Workers” focused around how children and young people expect their social worker to behave.  It’s not what you do it’s the way that you do it.  The outcome from the film was that 10 Golden Rules for social workers were produced by the Care Council.

The second half of the Film Festival showed films dealing with issues faced by adults and services available for them.

As if the films weren’t enough, there was popcorn at the interval and a really nice buffet at the end enabling plenty of networking and finding out more about the people behind the films.

The third Cohort of the PgCert in Leadership and Management had their graduation ceremony on February 27th at Sheffield University’s Halifax Hall. Dot Smith, Project Lead attended on behalf of the teaching partnership.

12 Senior Managers/practitioners from across the partnership successfully completed this course.

South Yorkshire Teaching Partnership are proud to be hosting a first… a Film Festival dedicated to showcasing films from experts by experience – children, young people and adults.  We are screening films designed to inform, challenge and inspire,  positioned within the world of social care or with transferable messages.  We will showcase films designed to impact on face to face interventions or on the development and delivery of services as a whole.

Following the screenings there will be a networking lunch with opportunities to meet the filmmakers, academics and social work colleagues from across the partnership.

Please share this invite with any colleagues or agencies that you think will want to attend.

For more information about the practicalities (including special dietary requirements) or how to get involved please email Sally.Dean@sheffield.gov.uk

To book your place please use this link: https://www.eventbrite.com/e/film-festival-showcasing-films-from-experts-by-experience-tickets-53723950783